For NBA Twins Marcus and Markieff Morris, it’s Family Over Everything with Their Foundation

NEW YORK CITY -- For Marcus and Markieff Morris, family has always come first. The twin brothers were born together, starred in high school, AAU ball and college together, were nearly drafted together in 2011 (Markieff went 13th to the Phoenix Suns, Marcus 14th to the Houston Rockets), and even signed their first contract extension together in 2014, when both were with the Suns.

But the Morris family extends well beyond “Mook” and “Keef.” They have three other brothers (Blake, David and Donte), and Marcus, Markieff and Blake were raised by their single mother, Thomasine “Angel” Morris. Though the twins' bond is inextricably bound to basketball, their work off the court ties even closer to their upbringing.

“We grew up with a single mom and that's the norm where we come from,” Markieff tells CloseUp360. “We dealt with a lot. A lot of the time growing up, my mom had to work, so she couldn't watch us play basketball or really do anything with us because she was trying to provide for us. Those single parents who do that, they sometimes just need a little extra help just to get by and we want to be those people.”

Marcus and Markieff have resolved to do just that through their aptly named Family Over Everything (FOE) Foundation. Behind a family-only staff and long-lasting relationships forged with the people they’ve helped over the years, FOE serves single-parent and underprivileged families through an organization that’s unique among NBA player-run charity operations. 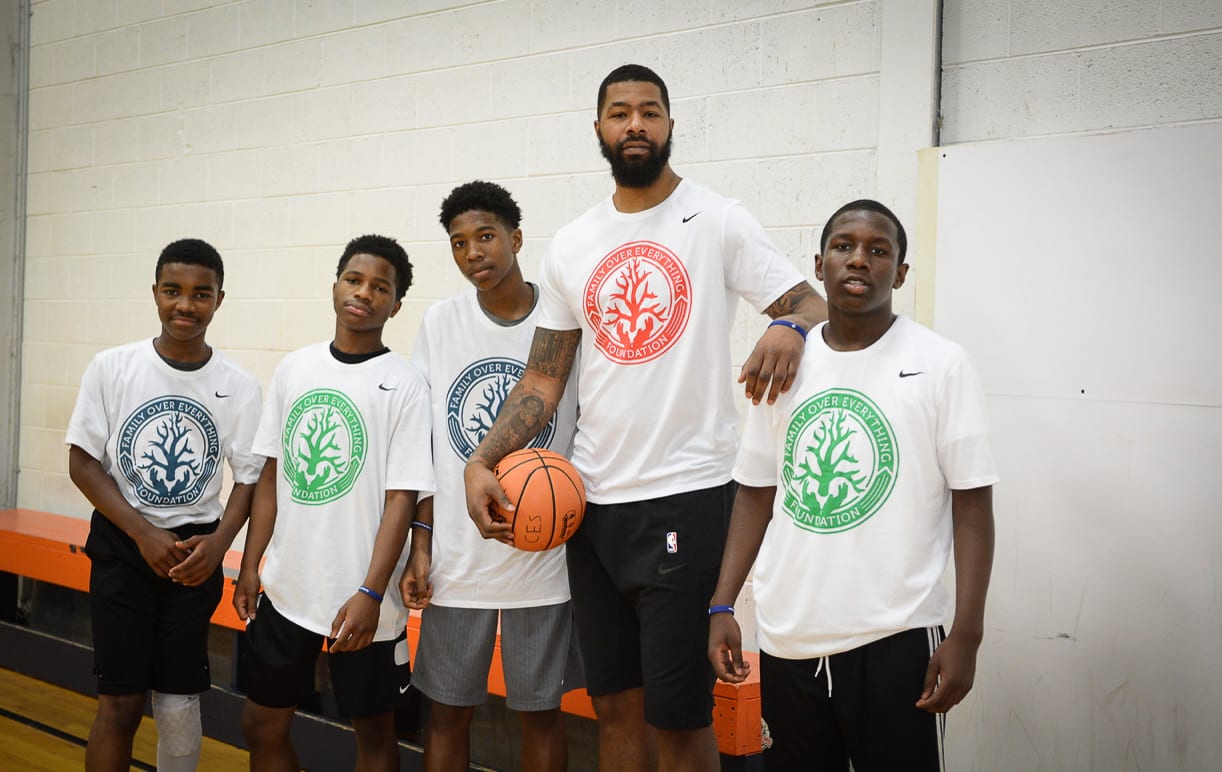 Markieff Morris at a Family Over Everything Foundation event. (Courtesy of Alycia Powell)

Mook and Keef’s efforts to help began long before FOE’s founding in 2017. They have hosted an annual basketball camp in their hometown of Philadelphia and have put on a backpack drive for seven years running. When Marcus was with the Detroit Pistons from 2015-17, he and his wife, Amber Soulds, who’s now the director of FOE, “kind of adopted” a local family from one of his pre-foundation events.

“We were sending stuff for the kids, so they could go back to school. We were setting up Christmases for them, so we've stayed in touch and we still are,” Amber says. “That's how close Marcus and Markieff get to some of these kids. They want to stay in contact; it's not a one-and-done.”

That giving nature came in large part from Thomasine, who passed it down to her sons from her own humble upbringing.

The twins' events and the spirit underpinning them have continued under the FOE banner, but are now backed by an official organization and the infrastructure that comes with it. That helps them avoid some of the hiccups that come with freewheeling community service.

“The biggest challenge was turning it into more of a business, doing it the right way,” Amber says. “They would just have somebody down at a park and they would blast out on social media, ‘Oh, we're going to be here, come here, pay for registration for camp.' And the people were giving $45 here, $25 there, and there was no accountability at the end. They were doing it because that's just what they do.” Marcus Morris and his wife, Amber Soulds, with their son, Marcus Jr. (Courtesy of Alycia Powell)

Amber suggested going the official route to keep things organized and functioning properly. Her degree in business management from Santa Clara University and experience working for the board of directors at her alma mater helped prepare her for the administrative load. From setting up the website and finding everybody’s roles to dealing with the behind-the-scenes paperwork, she spent nearly a year laying the groundwork for an organization that could broaden the brothers’ outreach.

“Most of the inner-city families don't have Twitter or have Instagram to look up when somebody's having an event,” Markieff says. “We needed that extra push where we can send out flyers, use the radio, any different platforms we needed to touch those families.”

What serves Family Over Everything best in reaching families is that the organization itself is comprised of one. Outside of the Morris brothers and Amber, there’s Thomasine, their mother and co-founder, and Thomas Robinson, the former NBA player who’s been a little brother to the twins since their time as teammates at Kansas.

"I'm excited about being able to do it," Thomasine says. "It's just a little time. We use our time doing an abundant amount of things, and then a lot of times we use our time not doing anything. So if the little bit of time that we use not doing anything, if we could give some of that back to some less fortunate people, then I think that we all will be blessed."

Having so many Morrises involved also helps to maintain close ties between family members, even as Mook and Keef are busy traveling with their respective NBA teams during the hectic season.

“We all love each other, so it's nice to be able to work together and to come together for events,” Amber says. “It keeps us more connected, especially since we're here in Boston. We don't have family here, and then we got D.C. and Philly. So it's another way for us all to get together to do something great throughout the year.” Markieff at a FOE event. (Courtesy of Alycia Powell)

Even when the Morrises aren’t together at events, they’re in constant communication to plan them. What started with the usual events Marcus and Markieff would put on now includes a yearly trip to All-Star Weekend, where Thomasine and other NBA moms treat local mothers to special events—like this year’s upcoming "Pamper Day" in Charlotte, building on last year's edition in LA.

"What I do is, I bring the moms in and then I make a challenge with them to see who can do the best job with their girls," Thomasine says. "The girls don't know that, but we do pick a girl and we introduce ourselves to the girl and then we help them to, like, getting their nails done. And they get clothes and they get a massage, and they just get pampered all the way around."

This past Christmas in Philadelphia, FOE brought a tree, decorations, presents and catering to celebrate the holiday at a women’s shelter, at Marcus’ behest. The Christmas prior, the Morrises paid off layaways at a Walmart in Philly. The foundation also recently teamed up with UNICEF to stage a Kid Power challenge, in which students in Boston and D.C. wore Fitbits to compete for the most steps recorded, racking up 438 life-saving nutrition packets for malnourished children in the process.

Future plans include an extended weekend around the brothers’ yearly basketball camp, which will feature a men’s empowerment event (FOE did a women’s event last year, and will alternate between the two) and celebrity flag football game, for which the Morrises are currently recruiting. The organization is also putting together a casino night-themed gala in order to fundraise for more events.

“You want it to get as big as possible, but at the end of the day, for me, it's not about the end. It's about the now—being able to help these parents and help these people,” Marcus says. “In Philadelphia, it's getting worse and worse, and you just want to be able to extend a helping hand for guys that made it out, like myself and my brothers.”

Markieff says he’ll text, call, even visit the schools of some of the kids he’s met along the way. And if he ever were to get traded or end up in another NBA city, he’d pick up FOE operations there as well.

FOE will treat single mothers in Charlotte to a day of pampering.

FOE will host a basketball camp in King of Prussia, Pennsylvania, with youth bussed in from Philadelphia. It will feature the Morris brothers, former NBA veteran Thomas Robinson and Philadelphia native Sean Evans. The kids will be treated to a motivational speech, food and prizes.

FOE will host a summit for men in Philadelphia to come and learn about financial literacy, home ownership, fatherhood, entrepreneurship and more.

FOE will host its annual backpack drive in the Morris brothers’ old neighborhood in Philadelphia. Every year, the foundation gives away hundreds of backpacks, along with raffles and snacks. The foundation will also offer free physicals for kids heading back to school. Marcus at a FOE event. (Courtesy of Alycia Powell)

It doesn’t just brighten up the day of those being helped. The brothers and their families get plenty of satisfaction out of the connections they’ve formed through FOE.

“Since they are in season, you see kind of more of the serious face ‘cause they're working, but when they get a chance to interact with the people at the events, they're so happy, and it's such a genuine feeling,” Amber says of the twins. “You could feel it, you could see it in their eyes how happy it makes them to see the impact of what they're doing.”

For Marcus, Markieff and FOE, they’re just doing what family does: helping their loved ones.

“I've seen myself in the same position as these kids," Marcus says. "It's an amazing thing the way they look up to us and know that there's an opportunity to make it out. That's always the biggest thing.

The parents of both NBA rookies Grant Riller (Char