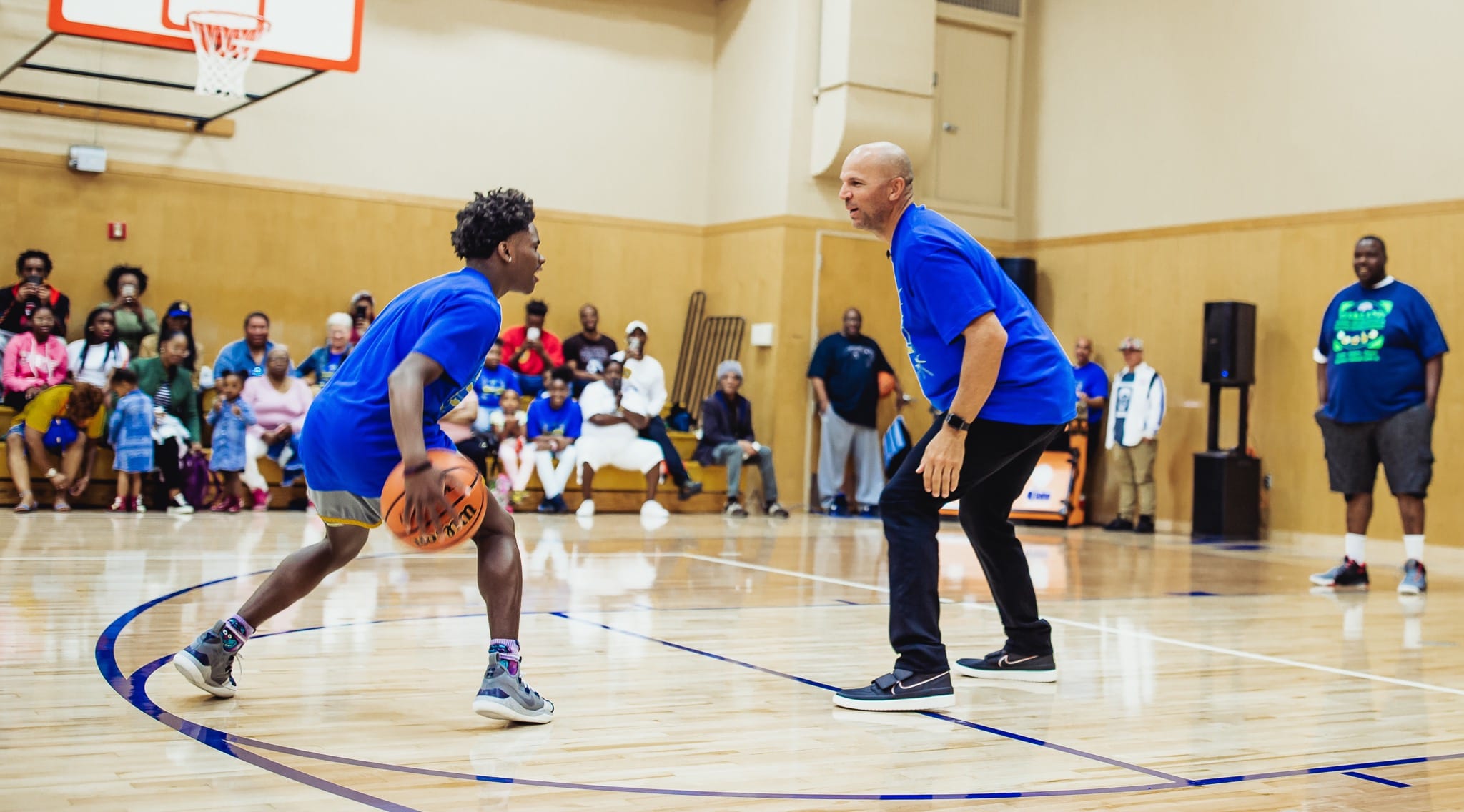 OAKLAND -- Nearly three decades since he first burst onto the scene as a basketball star at Saint Joseph Notre Dame High School, Jason Kidd’s legacy in the sport is secure. Before getting into coaching—as a head coach with the Brooklyn Nets and Milwaukee Bucks, and now as an assistant with the Los Angeles Lakers—the Bay Area native was an NBA champion, 10-time All-Star, co-Rookie of the Year, two-time Olympic gold medalist and Naismith Memorial Basketball Hall of Famer.

Even with all that, Jason has only kept adding to his impressive CV, as he did over the first weekend in May.

First, he was inducted into the Bay Area Sports Hall of Fame at the Westin St. Francis hotel in San Francisco. He accepted the honor from his high school coach Gordie Johnson among his childhood heroes, from Joe Montana and Ronnie Lott to Jerry Rice and Chris Mullin.

“I never really thought about the Hall of Fame,” Jason tells CloseUp360. “As a kid, you never think about the end of your career. You always think about the beginning. You're dreaming of all these things and you never dream of how it's going to end on a plaque in a hall of fame. It’s very humbling because you're playing a game that you love to play and you were trying to be the best at it. It was just a great honor.” Jason Kidd with Gordie Johnson, his high school coach, at the former's induction into the Bay Area Sports Hall of Fame. (Malaika Bobino)

Two days later, Jason returned to Oakland to celebrate the renovation of the Willie Keyes Recreation Center—a project that he organized and funded himself—with a neighborhood gathering.

“Even though it's not where I played, it's in Oakland and in a place that's tough,” he says in the rec center’s echoey dining hall, overlooking the blacktop. “I was one of these kids playing on the play structure, playing kickball, coming to play basketball.”

The rec center was packed with boys and girls ranging from elementary to high school, accompanied by parents and grandparents. Kids practiced dribbling on the glossy new court, waiting for one of the six hoops to open up so they could get shots up.

There, Jason wasn’t an NBA superstar. He was family. Friends from his life in Oakland congregated at the rec center, playing, telling stories and laughing like it was a backyard barbeque on a Sunday after church. From teachers and elementary school classmates—including one who teased him about smoking him in a footrace then and now—to childhood best friends and even Jason’s younger sister, Denise Taylor, the crowd embodied the community that raised him.

As the clinic began, Jason addressed the kids on the court. He started by asking them how they should treat something that belongs to them. The kids replied, “We take care of it.” Jason encouraged them to recognize the value of the renovated rec center.

“If you live in a two-to-three-mile radius of this rec center,” he said, “this place is yours.”

Jason’s renovations to Willie Keyes include a new hardwood court, glass backboards, fresh paint jobs and even new laptops for the computer lab—something he feels is just as important as any sports gear at the rec center.

“With today's technology, these are things that are taught at an early age,” he says. “Being able to give these kids every opportunity to be successful, that's all they want. They just need a chance and someone to believe in them.” Jason gave back to his hometown of Oakland by helping to renovate the Willie Keyes Recreation Center. (Jonathan Shorter/HipHopTV)

Jason found basketball by happenstance at an early age. When he was in the third grade at Saint Paschal Baylon School in Oakland, the basketball team needed more boys to sign up.

“My best friend raised his hand to volunteer for basketball, so I was, like, I guess I'll do that, too, since he's doing it,” Jason says.

From then on, basketball became his obsession.

“The first time I touched the ball, I fell in love,” he says. “It was an easy thing for me to understand and it just fit. You know when things sometimes come easy or you just really love to do it. Basketball was it.”

As the only boy in a family with two sisters, Jason spent his free time at the playground down the street from his childhood home in Grass Valley. When he wasn’t there, he was forced to be creative, inventing new ways to practice at home. He started using the wall in his bedroom to help him perfect his game. After his parents converted the garage in their two-bedroom home into a master bedroom, Jason got his own room and with it, a new wall.

“That wall with the window became the out of bounds, but also became my teammate because it was something that I used to practice my passing, being able to roll it behind the back, bounce passes,” he says. “The biggest thing was, the defense was the window. My goal was not to break that window or hit the window, though that ball did touch the window a couple of times and I held my breath, hoping that I didn't break it.”

Sam Taylor, one of his childhood coaches, thought it was time for Jason to experience tougher competition. So Sam took Jason from the upper middle class neighborhood of Grass Valley to gritty East Oakland, to hoop against more aggressive players at the Rainbow Recreation Center. Jason credits that neighborhood for improving his game as a kid.

There, Jason experienced a completely different culture—one he quickly grew familiar with after sobering and sometimes life-threatening encounters. One day after practice, while waiting to be picked up outside the rec center, he and a friend watched two young men play one-on-one on the blacktop.

“One of them called a foul. The other one disagreed. Shortly after the disagreement, there was a gun pulled. We see it and we start running,” Jason says. “Not to say that was the norm, but that was the type of thing that we saw. Those things wouldn't happen up in Grass Valley. I was introduced to a different part of Oakland.”

“Watching that scene, you got [rapper] Too Short playing in the background,” Jason says. “That was us. Seeing those kids playing on the playground, that was me and my friends.”

“It was the culture of Oakland,” he adds. “The playground was where you perfected your craft. We didn't have the video games that they have today. It was about meeting at the playground. We didn't have cell phones. Like, if you play today and you'd go, 'Hey, 3:30 tomorrow,' you were going to keep your word and be there at 3:30. There was no, 'Hey, I'ma text you or call you.' Those were the good old days because whatever you said, that was your word, and if you didn't show, you knew you were going to get in trouble.” Jason grew up in the upper middle class neighborhood of Grass Valley, but came of age as a basketball player in rougher East Oakland. (Jonathan Shorter/HipHopTV)

While the spirit of Oakland remains forever ingrained in him, Jason hasn’t spent much time in the Bay Area since his career took off after college at the University of California, Berkeley. Over the past 24 years, between six different NBA cities—none near Oakland—he’s finally had a real break. With this newfound free time, he’s been able to reconnect with the community on a personal level.

In the past year, he revisited the old Rainbow Rec Center after its recent renovation with his old friends: J. Nicholas Williams, the director of Oakland’s department of parks, recreation and youth development, and Shawn Granberry, the CEO of HipHopTV, a new hip-hop content platform where Jason is on the board of directors. After J. Nicholas and Shawn brought it to Jason’s attention that Willie Keyes was another rec center in desperate need of renovation, the choice was easy. With help from his two fellow Oakland natives, Jason was able to organize the renovation of Willie Keyes.

Though it wasn’t the rec center he grew up in, it felt the same to him. Same kids. Same type of community. Same need.

“Now that he’s got a break in his career, he can give back and enjoy time with family and friends, and look to see how he can improve the community,” Denise says. “It’s an awesome opportunity and I’m looking forward to seeing him do a lot more. Having a career like he’s had, playing basketball since third grade, he hasn’t had a break. That takes a lot for professional athletes. They’re always working all year long.”

Before Denise could even speak, Jason butts in.

“Don’t believe a word she says!” he says with a laugh. She smiles and rolls her eyes.

“I told her that this is probably the most time we spent together, just in the sense that I was always gone, playing some sport,” Jason says. “I wasn't home a lot, so it's been fun being able to hang out with her this weekend.” Jason will serve as an assistant on head coach Frank Vogel's staff with the Los Angeles Lakers next season. (Jonathan Shorter/HipHopTV)

The weekend following his Bay Area Sports Hall of Fame induction and Willie Keyes celebration, Jason landed the assistant position with the Lakers, furthering his career in NBA coaching.

“I’m excited to be part of the Laker family,” he says, unable to comment much before the official introductory press conference.

But while his new job in LA has the press in a frenzy, Jason has more than that on his mind. He plans to open a school in Oakland that will provide less-fortunate kids with a better education and opportunities. Though he’s only in the beginning stages, researching sites and locations, he’s got big plans.

“There's things that just pull at you and you want to do,” he says. “I've always had this written down that I always wanted to open a school and do the school right, so that kids could get a proper education. Give them the proper tools to be successful. You don't have to be an athlete or entertainer. As much as we produce those, we also produce doctors, lawyers, people in media.”

Back at Willie Keyes, Jason was as humble as he was gracious, taking selfies with anyone who asked and making time to play one-on-one with nearly every kid in attendance. Despite his induction into the Naismith Memorial Basketball Hall of Fame in September last year, the Bay Area Sports Hall of Fame, and his new coaching gig with one of the most popular franchises in the world, he doesn’t let the hype phase him. He’s still focused on making a real impact on the Oakland community that he came from.

“It's just about helping,” he says. “I really never sat there and thought about, Well, did I have a good enough career to make the Hall of Fame? It was just more or less, Did I win? Did I get better? And what else can I achieve before my gas tank is on empty?”