In Life After NBA, Charles Oakley Finds Delicious Way to Help During the Holidays

NEW YORK CITY -- Charles Oakley has one thing on his mind—and when Oak is after something, you’d best not stand in his way.

“Where are the rolls?” he asks—half-playful, half-serious—while preparing for his annual Thanksgiving event at the East Harlem Scholars Academy.

“All of that should have been here already” he continues. “You know I don’t play about my food.”

Charles is used to the bright lights of NBA arenas where everybody knows him. In his post-playing life as a caterer, he’s still getting attention, but in a very different way. He’s traded in hard screens, timely rebounds and locker room leadership with the Chicago Bulls, New York Knicks, Toronto Raptors, Washington Wizards and Houston Rockets for sternos, spatulas and scrumptious meals as the head of his own catering business, Oak In The Kitchen.

The 19-year NBA veteran entered the cooking scene in 2008 with his own cooking show, entitled “Cafe Oakley,” in which he focused on making healthy yet delicious meals—including his specialty, turkey burgers.

Since then, Charles has opened locations of his restaurant (Red, the Steakhouse) in Cleveland and Miami, appeared on the Food Network’s hit show Chopped, been working on a cookbook and catered events for LeBron James and Oprah Winfrey, among others.

Charles, though, doesn’t make food just for money and fame. He also uses his skills and experience in the culinary industry to give back to the communities of which he’s been a part, including this particular event in Harlem. He was invited to cook for the academy’s College Scholars Program for kids, who were home for the Thanksgiving holiday.

“I like to cook, so I figured for these younger males and females, let me show them something different,” he tells CloseUp360. “Most of the time they get burgers and hotdogs, fried food like wings. I didn’t want to do that today.”

After spending nearly five hours preparing the meal, Charles serves the nearly 40 attendees who came to the cafeteria himself—all while wearing a black and white “Oak In The Kitchen” shirt. He carefully listens to what each student wants to sample without judging their choices.

“The food was amazing,” Princess Parker-Smith, a six-year veteran of the event and recent NYU graduate, tells CloseUp360. “I didn’t really have an appetite, but I cleared my plate.” 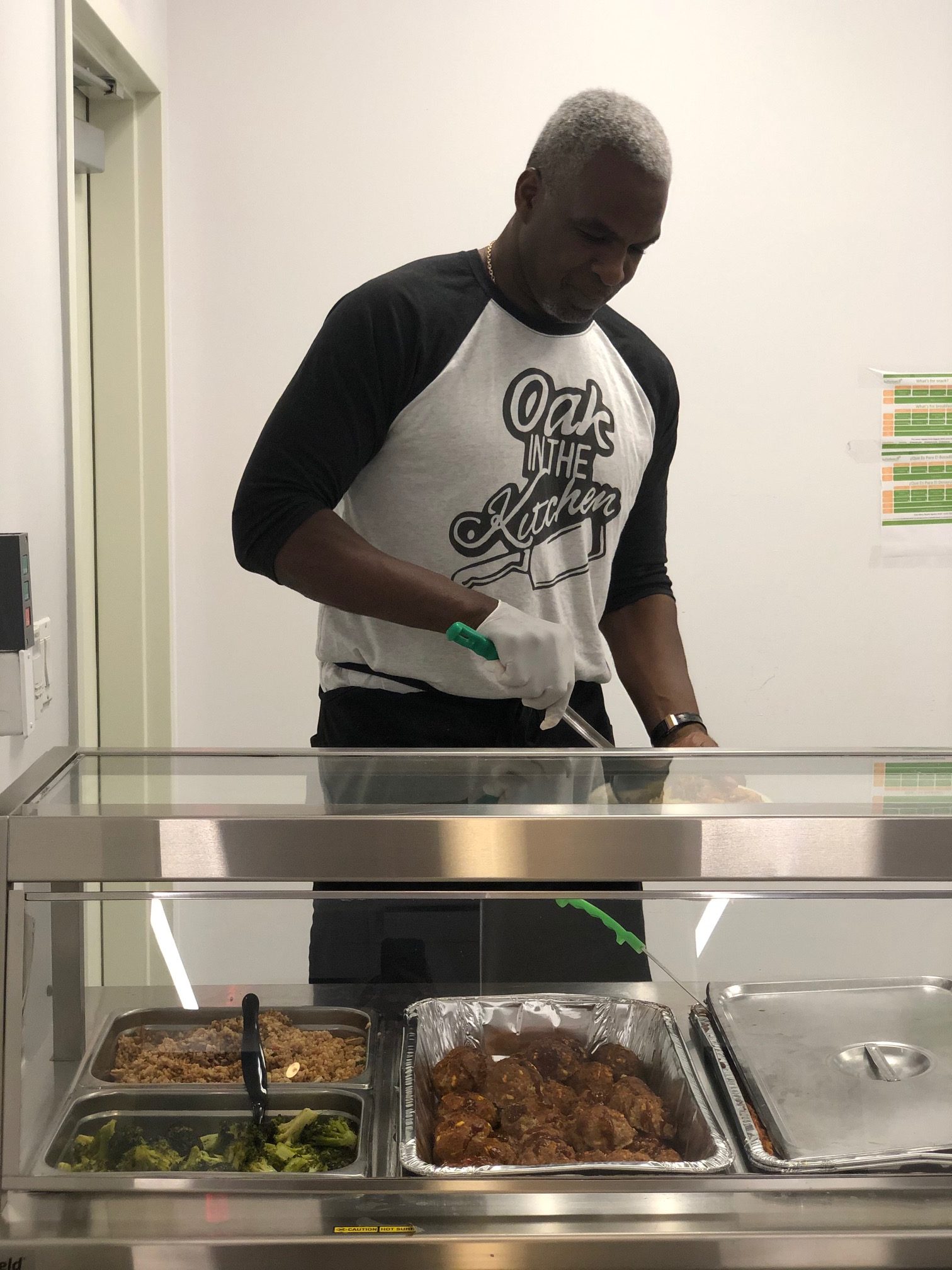 As the crowd starts to settle, Charles darts around the room like a busy host. He checks on the students as they’re eating, always asking, “How is it? Can I get you anything else?”

Though Charles was known more for dishing out punishment than full plates during his NBA tenure, he comes by his graciousness and hospitality just as naturally. He credits his grandfather, who was a farmer in Alabama, for showing him what it means to serve others.

“He’d get up in the morning and go to the field, go to town, go to church, give people rides,” Charles recalls. “He would ask, ‘Do you need something from the store? Do you need me to do this or that?’ He was just giving, giving and giving.”

In Harlem, Charles is busy giving, giving and giving—this time, swirling whipped cream on top of bread pudding—when the event’s organizers ask him to speak to the group. After one last squirt, he cleans his hands and addresses the students. As the kids chow down on dessert, he stresses the importance of education, dedication to one’s craft and other life lessons he’s learned through his nearly 55 years on Earth.

Following his speech, Charles opens the floor for questions. The kids demur, until Princess pipes up. She asks the Cleveland native how he manages to stay in shape, 15 years after he retired from the NBA, and how someone from his former profession becomes a chef. Charles jokes that he never got out of shape, despite his prevailing love for food. For him, life after the NBA has afforded the time, energy and resources to pursue the culinary arts with more passion and dedication.

Princess may not have known who Charles was before the dinner, but after hearing him speak and tasting his food on what happens to be her birthday, she’s come away inspired by this surprising gift.

“This was exciting,” she says. “He’s a really nice guy. He’s a good speaker and I appreciate hearing his story. I got some motivation from that today.” Charles cooked up a Thanksgiving meal for students at the East Harlem Scholars Academy. (Warren Shaw)

Princess’ mom, Karen, is proud of her daughter and grateful for the academy’s continued pursuit of excellence, especially with programs like Oak’s Thanksgiving dinner. As the event’s first-ever celebrity guest chef, Charles has raised the bar for this meal going forward.

“My thoughts on this are very positive. He’s a role model and took time out of his busy schedule to talk to these students,” Karen says. “I thought this was wonderful and I think my daughter was impressed.”

And not just with Oak’s cooking. Food and fame may draw people to Charles’ table, but he hopes they come away as motivated by his messages of good will and real-world education as they are satisfied by his meals. On this day, the kids in East Harlem got a taste of all that he’s able to deliver.